Dr. William Voges was born in St. Louis, Missouri and grew up splitting time between St. Louis and Starkville, Mississippi. Growing up, he was an avid athlete, playing everything from soccer to football, to baseball. For his undergraduate degree, William went to Mississippi State University, where he was a resident advisor, played for the Mens club soccer team, and was the Student Director of Operations and for the womens soccer team. He graduated in 2014 with a degree in Kinesiology-Clinical Exercise Physiology. Following graduation, he worked as a physical therapy technician for a year, before entering the Doctor of Chiropractic program at Logan University.

At Logan, William took additional courses outside the curriculum to increase the number of tools in his tool bag, honing in on Dynamic Neuromuscular Stimulation (DNS) rehabilitation, Selective Functional Movement Assessment (SFMA), and the McKenzie Protocol as personal favorites. William is excited to join the Juneau community, and is looking forward to bringing another set of tools to the wonderful staff at Arctic Chiropractic to continue to help the people of Juneau develop and maintain a healthy, active lifestyle.

William graduated in December of 2018, and is extremely excited to be in Juneau with his wife Laurel and dog Samus. In his free time, he sometimes enjoys staying in to play the occasional video game, but primarily likes to be outdoors, enjoying everything from hiking to playing soccer to fishing. William believes maintaining an active lifestyle is one of the best ways to maintain health, and lives his life accordingly. 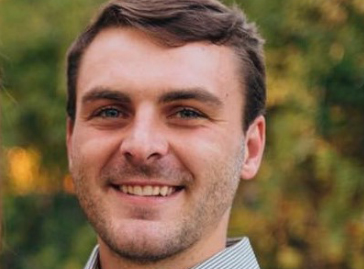